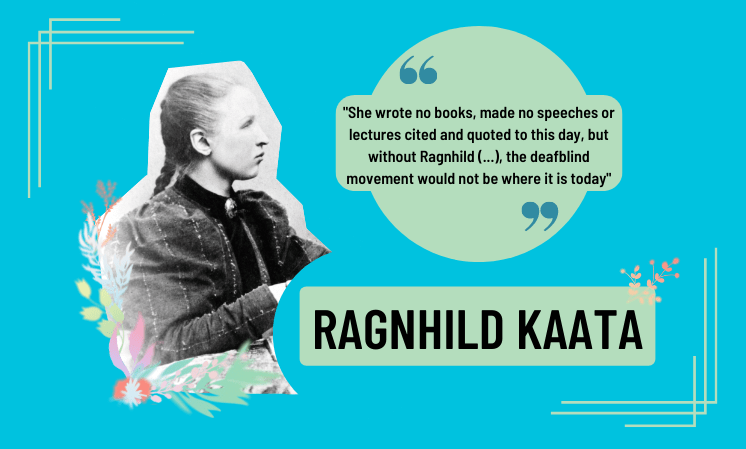 Ragnhild Kaata was born in the mountainous region of Valdres, in central Norway, on 30 May 1873, as the illegitimate child of 21-year-old and unmarried Gjertrud Halstensdatter. For the child to be christened, the name of the father had to be disclosed and was revealed to be Ole Kaataejet from the tenant farm Kaata-Ejet or Kaata-Jordet (meaning ‘Cottage-Field’). However it was or came to be, the priest crossed out Ole’s name, and put the name of Ole’s younger brother, 19-year-old Tollef, instead. Little Ragnhild was thus christened Ragnhild Tollefsdatter (‘Ragnhild Tollef’s daughter’ in English), and Gjertrud and Tollef was married about a year later. The little family settled at Tollef’s family home, Kaata-Ejet, and it did not take long before little Ragnhild had a little sister, named Gjertrud after their mother. Like so many in the 19th century in the Valdres region, a region of spectacular nature and breath-taking landscapes, the little family of four were penniless and putting food on the table was a never-ending struggle.

When Ragnhild was about three and a half years old she was taken ill with scarlet fever, a feared illness that caused much grief and sorrow in many families as it claimed the lives and health of its youngest members, particularly during the six-month-long winter seasons. In the poor region of Valdres, the district physician did not have the time and means to call on most of the sick children. Landlocked and mountainous, the valleys in Valdres did not offer much fresh food or direct sun light in the winter, and the cramped smoke-filled cottages that most families lived in did not provide much fresh air, which certainly did not help the situation. When the district physician finally was able to call on Ragnhild at Kaata-Ejet, she had already lost both sight and hearing.

As a toddler, Ragnhild had learned to speak but when she could no longer hear herself or others, her oral language soon faded into oblivion. The years came and went, all the while Ragnhild lived at home with her rapidly growing family, now with five younger siblings. As the family expanded there were more mouths to feed, and the destitution became even more tangible. Ragnhild only had one dress, which she wore inside out on weekdays, so that when going to church on Sundays it would appear cleaner. Tollef, Ragnhild’s father, was often away taking up work wherever he could find it, to feed the hungry ones at home.

Simultaneously, enquires where made as to where Ragnhild might be educated. Several well-connected and highly engaged individuals were involved in trying to provide Ragnhild with an education. Heartfelt articles were written about Ragnhild in national and international newspapers, resulting in a very successful fundraising campaign for Ragnhild and her family.

Finally, at the age of 14, Ragnhild was enrolled at Hamar Public School for the Deaf. Though Ragnhild was a social and outgoing person around those familiar to her, she was sceptical towards strangers. She would kick, hit, and scratch those she did not know if they came to close. It was with a great deal of patience and understanding that teacher Elias Hofgaard eventually managed to build a trusting bond with Ragnhild.

Although there had never been a known case of a person with pre-lingual deafblindness who had learned to speak successfully, Hofgård had high hopes for his new student, firmly believing in and practicing the oral method for his deaf students. Through creative and playful teaching methods, Mr. Hofgaard and Ragnhild explored the power of breathing and the vibrations of the different vocalisations: blowing out candles and racing with paper balls that they blew across the floor, touching the lips of the teacher and the other students in the classroom during classes. Mr. Hofgaard then made wooden blocks with raised letters on them, so that Ragnhild could feel the shape of the letters whilst he said them out loud. As Mr. Hofgaard spoke, Ragnhild would place two fingers on his lower lip and her thumb on his throat to feel the movements of the mouth and the vibration of his vocal cords. Ragnhild was quick and impatient, but Hofgaard insisted on learning every sound perfectly before moving on to the challenge of putting the sounds and letters together to form words. After tediously practicing the pronunciation of short words, such as ‘ur’ (English: ‘clock’), ‘bord’ (English: ‘table’), ‘fot’ (English: ‘foot’), Ragnhild understood that every object, every person, everything, had a its own mouth position. A description. The happiness was great, for student and teacher alike.

Ragnhild was thriving at Hamar. The transformation must have been tremendous as knowledge and skills expanded her world. The girl who would scratch strangers who came too close was now an outgoing and cheerful young lady with a sharp wit combined with an excellent sense of humour. She was skilled in knitting and embroidery, loved dancing, and had an unquivering faith. Ragnhild made an impression on all those who met her, and she never forgot a face nor a name.

Ragnhild’s education and journey through the world of knowledge continued, and articles on her progress was published in both Norwegian and American newspapers. Many from Ragnhild’s home district, Valdres, had emigrated to the U.S. to try and craft a better life for themselves there, and the Norwegian community in the U.S. were still very much engaged in the goings-on in their home country. It was one of these articles, written by journalist and deaf advocate Lars Havstad that eventually caused ripple effects for the entire deafblind movement. About the same time as Ragnhild learned oral speech, Helen Keller was taught the fingerspelling method, a communication method that was only spoken by a handful of individuals. Havstad, who himself was deaf, had benefitted greatly from learning oral speech, and argued that it would be more beneficial for Helen Keller to learn the oral method. The word spread amongst deaf educators. Who was this Ragnhild, who is claimed to be able to speak? No one (outside of Norway, at least) had ever heard Ragnhild speak. Clearly, someone had to make the journey over the Atlantic to meet with this young girl from Norway.

And so it was that Mary Swift Lamson, a deaf educator and former teacher of Laura Bridgman’s (but that is a different story, for another time…) came to Hamar Public School for the Deaf to meet with Ragnhild. Even though Ragnhild only spoke Norwegian, and her guest only spoke English, it was clear to the guest that Ragnhild spoke with excellent articulation and pitch and was able to understand what others said by placing two fingers on their lower lip. When presented for Ragnhild, Ragnhild repeated Mrs. Lamson’s name with perfect pronunciation, and said “I am glad to see you” (in Norwegian, of course). The impressed Mrs. Lamson then travelled on to meet another young girl with deafblindness:

“Mrs. Lamson had scarcely finished telling me about this girl’s success before I was on fire with eagerness. I resolved that I, too, would learn to speak.” – Helen Keller (1905)

Whilst Helen Keller burnt with inspiration and determination to learn how to speak orally, Ragnhild received sad tidings from home. Her father, 36-year-old Tollef, had died of the flu, leaving wife and seven living children, the eighth on the way.

As an adult, Ragnhild moved home to live with her family. She still visited Hamar every year until the too early death of her teacher Mr. Hofgaard in 1906. When her mother Gjertrud died, Ragnhild went to live with her sister before settling down permanently at ‘De Døves Vel’ in Hamar a home for deaf and deafblind persons. Here she lived with other persons with deafblindness who had studied at Hamar Public School for the Deaf. It was here at ‘De Døves Vel’ in Hamar that Ragnhild died of bronchitis on the 12 February 1947, at the age of 74.

Ragnhild Kaata’s achievements marked the start of a new era, a shift of paradigm in the education and inclusion of persons with deafblindness. Ragnhild proved to the world that persons with deafblindness are fully capable of not only learning, but to participate in society on an equal basis with everyone else, a notion not commonly held in her own lifetime. Ragnhild’s achievements caused ripple effects across countries and oceans, she was the direct inspiration of the deafblind movement’s greatest and most famous advocate, Helen Keller. She wrote no books, made no speeches or lectures cited and quoted to this day, but without Ragnhild Tollefsdatter from Kaata-Ejet, the deafblind movement would not be where it is today.

Sanja Tarczay, WFDB’s new President, would like to share a thank you message with everyone. Below you will find the video and transcript:   Video

WFDB elects its new Board during General Assembly in Kenya

WFDB held its 6th General Assembly in Nairobi, Kenya on the 24-25 October 2022. More than 30 delegates with deafblindness were present from around the

WFDB leads the discussion on accessibility during SHAPES Plenary

The SHAPES Project held its 3-day plenary from the 13th to the 15th of September 2022 in Thessaloniki, Greece. This was the first time the

In the aftermath of the pandemic, WFDB is still facing challenges in organising events. However, WFDB is still working to organise the WFDB General Assembly